Electro Harmonix pedals (EHX) are some of the oldest and most respected effects for guitar and bass.  Founder Mike Matthews is crazy in all the right ways and having come from a keyboard background he has a unique perspective on sound and music that normal guitarists might not think of.

Since EHX made their first release with the LPB-1 in 1969, they have continued to release distinct pedals with signature sounds.

So what’s the catch?  EHX releases a LOT of pedals, and sometimes multiple versions with slight changes. I’ve done the work to sort through all that.

Below is my list of the MUST HAVE Electro Harmonix pedals.

These are my top “get ’em while their hot” pedals.  This would make a killer pedal board too. Best of all, everything is designed and assembled in New York City.  Amazingly, EHX pedals have some of the lowest prices for guitar effects making them an amazing deal.

EHX rewrote the rules when the Micro POG was released. This is the smaller and simplified version of the larger POG2 and the huge HOG, both a crazy pair of powerful guitar synths, the Micro POG creates beautiful glitch free octave down and octave up versions of your guitar tone. This allows you to expand your sound in a way that was previously not attainable. From church organs and celestial choirs to dark metal riffs that burn a hole in your amp, the Micro POG does it all. Users include everyone from Jack White to Josh Homme from Queens of the Stone Age.

EHX also makes the Nano POG, an even smaller and less expensive version.

This technology has also been used in the recent series of EHX pedals designed to make your guitar sound like dedicated organ or keyboard such as the:

Have you heard of the Klon Centaur?  If not, the Klon was/is a guitar overdrive pedal that Bill Finnegan developed and hand built between 1990 and 1994. The Centaur is characterized as a “transparent” overdrive, meaning it adds gain without significantly altering the tone of the guitar.  Oh… And they sell on E-Bay for THOUSANDS of dollars.

Hundreds of third party manufactures have tried to clone the original. You often see these “Klones” running $200-$300.

In Classic Mike Mathews fashion, EHX released there own version of this pedal and priced it less that $100.

And to make things even more fun, if you want a Soul Food and a Micro POG in one compact pedal, EHX now makes the Soul POG.  It even has an effects loop so you can patch-in the rest of your rig in as needed.  EHX, you crazy bastards! I love it.

The Big Muff is, without a doubt, one of the most famous guitar effects of all time.  This dark fuzz with infinite sustain has become one of the signature fuzz tones along side other designs like the Fuzz Face and ToneBender. The most famous user has to be David Gilmore and his smooth never ending violin like sustain.

If you only buy one EHX pedal, most likely it’s going to be a Big Muff.

I have chosen to list the Big Muff with Tone Wicker as it’s a popular and versatile option. The Wicker switch helps to adjust frequencies, making the pedal cut in the mix more and giving you additional tone control without being overly complicated.

I’ll keep this short…  There are only a handful of flangers that have become “The one to own.” This is one of them.  Besides some super classic tones it has this signature “freeze” feature where the flanger remains peaked and doesn’t move.

Available in various versions, you can find an Electric Mistress that suits your needs (and budget).

Check out this great video about flangers and hear why the Electric Mistress is so beloved:

Delay is one of those effects that guitar players love to hate. Everyone has a specific type of delay they like and countless versions they detest. Luckily for EHX they hit gold with the Memory Man. This pedal, and its many offshoots have become beloved among delay snobs.

I will admit that I am not a huge fan of the Memory Boy and the way the sound decays; for lack of a better explanation, I feel like it begins to sound like ring modulation. But, this is just my feeling and countless others love that pedal.

What I am a fan of is control and the Memory Man and Memory Boy give you a lot of options to control your sound.

In fact there are so many controls and versions of these pedals that it can be hard to pick the right one for you.

I’ll try to breakdown the main differences between the versions below.

Oh, and if you like to keep it simple, EHX sells a small and super inexpensive three knob version called the Memory Toy. More on that below.

It was time consuming, but I tried to break down all the Memory Man/Boy/Toy versions so you can get a straight forward idea of the differences.

The Stereo Memory Man is a whole new digital circuit designed to bring the Memory Man’s sound into the digital age.

Okay, so that’s my list of the Five Must Have Electro Harmonix Pedals.

EHX makes a lot of stuff and sometimes they feel like crazy experiments.  But, the good news is that the prices are often within reach and when they hit it out of the park they really nail it.  We need more crazy ideas in the guitar world.

EHX has always been on the cutting edge and we own them a lot for not being afraid to take a risk. 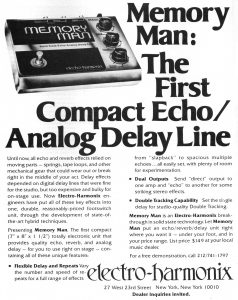